An Unforgettable Day with Sandra Betzina 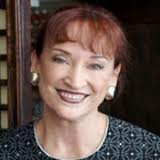 Imagine my delight when I was informed by Sandra’s beautiful assistant Karla Francis that I had won first prize in Sandra’s Christmas drawing!  I have followed Sandra for years and own all of her patterns and books. I own many of her DVD‘s and never missed an episode of her television show on HGTV.  I even have two of her books in my iPhone!! (They are available free after joining her site Power Sewing ) 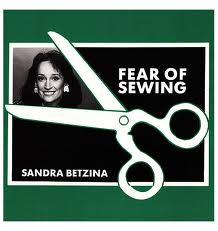 I took all of her classes at the Sewing and Stitchery Expo at Puyallup, Washington and had wonderful chats with her in her booth.  On her television show, Sew Perfect, Sandra always chose to feature and highlight other people in the sewing field and was largely responsible for their success.

With Sandra’s busy schedule and my comedy of errors that ensued during the months of April/May 2010, I wondered if the day would actually even occur. In April, I fell on a brick porch carrying in a calla lily and broke my pinky. Then a week later, I had the most excruciatingly  painful ear infection that lasted for weeks and I could hardly hear out of my left ear. By late June, I was really feeling much better and we set a date for July  19. Wonder of wonders, Richard were able to get good tickets for AT&T Park to watch the San Francisco Giants play the New York Mets with Santana pitching and the Mets WON!!

Included in the prize was a 2 night stay at Marines Memorial Hotel across from the Art School.  The hotel is in the heart of San Francisco and really quite beautiful. 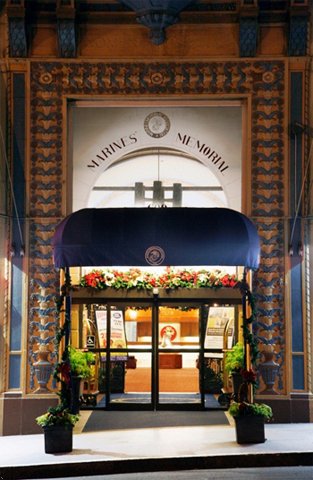 A beautiful hotel located in the heart of San Francisco, California

In the  morning, I headed out to Sandra’s beautiful loft in San Francisco.  Sandra spreads sunshine wherever she goes and this point will reinforce itself repeatedly throughout the day.  As the concierge was helping me into the cab, he stated “Please give Sandra my love, I’ve known her for years.”  Sure enough, when I gave the message to Sandra she knew his name and spoke well of him.  This brings me to a major object in Sandrology: Sandra has something good to say about everyone. Sandra recounts a story of her mom’s challenge to her and her brother. For everyone they met, they needed to find something good to say and if they did, they’d get 10 cents.  If they said something bad, they’d have to pay 25 cents.  Another story Sandra tells is of her Mom vacuuming with a big smile on her face. She describes kind of making fun of her Mom for being so happy doing such a humdrum job. Sandra’s Mom  handed her the vacuum stating “You better make friends with this because you are going to be with it for years to come.”

Sandra’s eloquent husband Dan met me at the door and then took my fabric/sewing things to Sandra’s studio while Sandra and I stopped at this charming place for mocha/cappuccino.  Sandra’s studio is enchanting.  I got to see where she creates and it is indeed wonderful. There were sewing machines, serger, coverstitch machine, cutting table, pressing table, and beautiful artwork by her daughter Kim on the walls.  Sandra showed me the process she goes through when designing a pattern and how many times she makes them up in different fabrics.  Sandra took my  measurements for her Vogue 1096 pattern . Then she picked out the perfect softest cotton knit and I proceeded to make the most comfortable  fitting pants on the planet. What I really love about these pants are the side pockets. Most one seam pants are pocketless.

As Sandra and I were sewing… her landlord wandered in. You get the feeling that the building is really one big happy family. 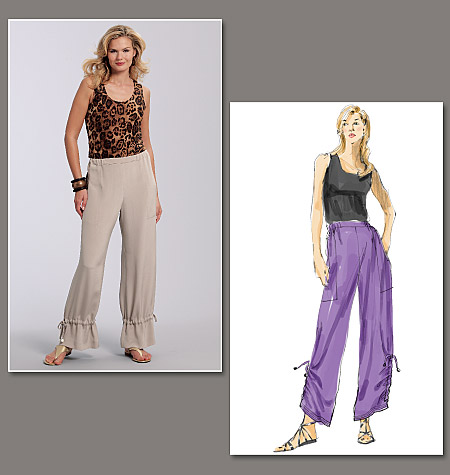 His name is Seymour Jaron and he owned the building in which several studios were housed. His adoration of Sandra was obvious as they chatted and teased. I even purchased his book, “From Mena to Seymour Crossing Many Bridges” He is originally from Brooklyn, a first generation Russian Jew, which is similar to my background.

In another close-by studio Sandra introduced me to a talented artist and fabric designer  She is one of the forces behind Imageglow Candles. There were all sorts of fun things in her studio as well as indications of an artist at work.

It should come as no surprise that Sandra is a mentor to younger designers. I was honored to go into Cat’s studio and view the coolest design called a “convertible dress” This studio was romantic and frilly and it was full of sophistication.

Soon it was time to go back to Sandra’s loft and prepare for dinner. Sandra graciously invited my husband to join us for dinner. The loft is beautiful. The kitchen is to die for. The aroma  of the dinner that Dan was preparing permeated the loft. Sandra explained that she usually has ‘quiet time’ before dinner. You’d never think this ‘sewing Energizer Bunny’ ever rests.  Sandra’s new books “Power Sewing Toolbox Volumes 1 and 2” were back from the editors and I got a sneak peek. They are both on my Christmas list. (You reading this Richard?) 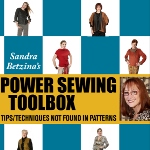 Dinner was wonderful. I think Dan prepared the best risotto I ever tasted. Dan and Sandra entertained us with some of the wittiest and funny stories of their experiences in business and travel.  Dan and Sandra are so personable and Richard and I felt so welcomed and pampered.  What a wonderful experience it was to spend that time with Dan and Sandra.

A Few of My Favorite Sandra Betzina Things

I love many of Sandra’s patterns. There are also several ‘go-to’ books that are always at my fingertips: 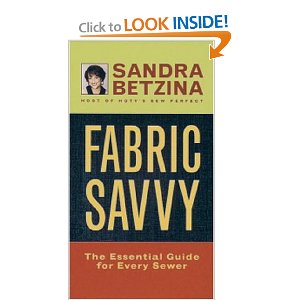 One of my favorite 'go to' books

This and Fabric Savvy are wonderfully helpful to me 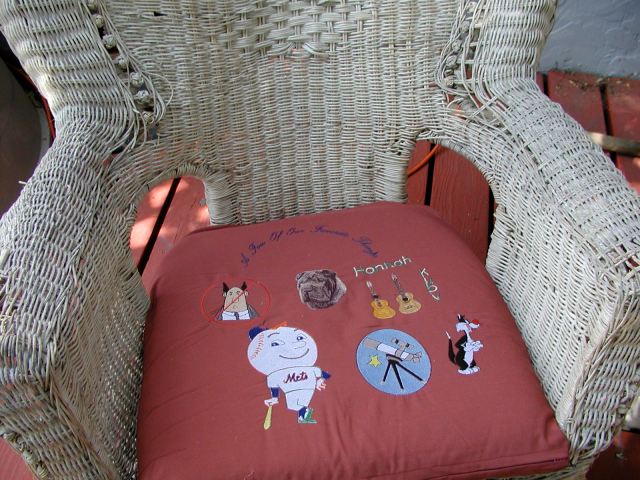 Richard's double-sided cushion. I digitized the telescope and Mr. Met 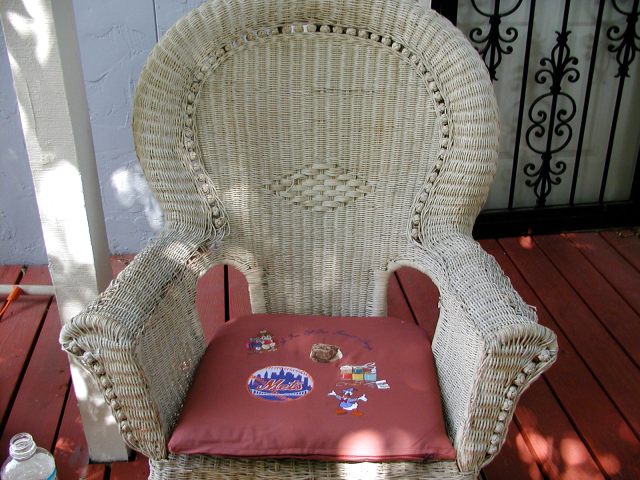 I used this book to make both cushions. 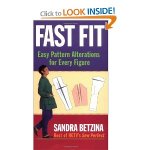 Next best thing to being with Sandra

I love sewing, machine embroidery, cooking, photography and MAC's. I love my iPhone. I have a beautiful chinese sharpei named Chole. I'm happily married to my best friend. I have a wonderful son named Bart who is a LCSW, that I'm very proud of. I am a Christian. I have a Nikon D300S and an Olympus 510 along with a few other point and shoot camera's. I love my Bernina 830 sewing machine.
View all posts by kuby2u →
This entry was posted in Sewing, Sewing Projects and tagged AT&T Park, Christmas, HGTV, iPhone, Marines Memorial Hotel, New York Mets, Power Sewing, San Francisco Giants, Sandra Betzina, Sew Perfect, Sewing. Bookmark the permalink.

2 Responses to An Unforgettable Day with Sandra Betzina